Way back in 1676, one hundred years before The American Revolution, the people of Virginia went through a very tough time under oppressive rule from a local tyrant. Yes, there was, of course, a tyrant on the throne of England at the time, but the local tyrant, Governor of Virginia, William Berkeley was a self-centered, arrogant, evil ruler over the colonists. Governor Berkeley imposed unjust taxes on the citizens and illegally performed back door deals with the murderous Indians of the land (sounds a lot like the current administration with all these unjust taxes and, gasp, deals with the murderous drug cartels?). On top of all that, Berkeley appointed his friends to hold offices leaving no representation for the people (Look! Another connection to today).

War with the Indian tribes rippled throughout the entire coast. Up North, King Philip’s War was reaching a bloody climax. In Jamestown, Virginia, the Susquehanna Indians, among other tribes, were slaughtering the American colonists whenever the opportunity availed itself. Now, this story is not about who was right or wrong amid the warring of Indian tribes and the colonists. Chances are, if you’re reading this on Lox’s website, then you’re likely not one of those yahoos who believe the Native Americans were all cuddly and peaceful and without sin until the bad white man came and murdered them for no good reason. Now, I’m not trying to ruffle feathers here, but there were atrocities committed on both sides. Even more atrocities were being committed tribe against tribe long before Whitey arrived. Ultimately, yes, the Feds treated the Natives very poorly and unfairly (yet another reason to not trust your government). OK. Let’s get back to Jamestown, 1676.

The tyrant Governor refused to intervene with the crimes against the colonists committed by the Indians, because that would be bad for his back door drug trading—er, I mean back door fur trading (Sorry. I was confusing this administration and the cartels with the —never mind—back to the story.). Since the Governor refused to protect the people they formed their own militia to handle the matter. All they needed was someone to lead the outfit.

Berkeley refused to commission an officer which would validate the militia and, in turn, would lead them to fight the Indians. That’s where our bearded hero comes into play. Nathanial Bacon, a recent transplant from England, was a lawyer by profession. His plantation was subject to Indian brutality and he wanted to rid Jamestown of the marauders.

Defying the Governor’s orders, Nathanial Bacon led the militia into battle against the Natives. Nathanial exhibited great courage in battle and instantly won the hearts of the men in the militia. His bravery, however, intimidated the Governor—bravery and courage has this effect on tyrants. Upon returning from battle, news reached Nathanial that a warrant for his arrest was issued. Nathanial narrowly avoided capture under the cover of darkness and hid out with friends for a short while. While he was hiding out, a mob of 500 colonists protested against the Governor in defense of Nathanial Bacon. The cowardly Governor, in an attempt to appease the people, not only retracted the warrant, but also commissioned Nathanial as a General. 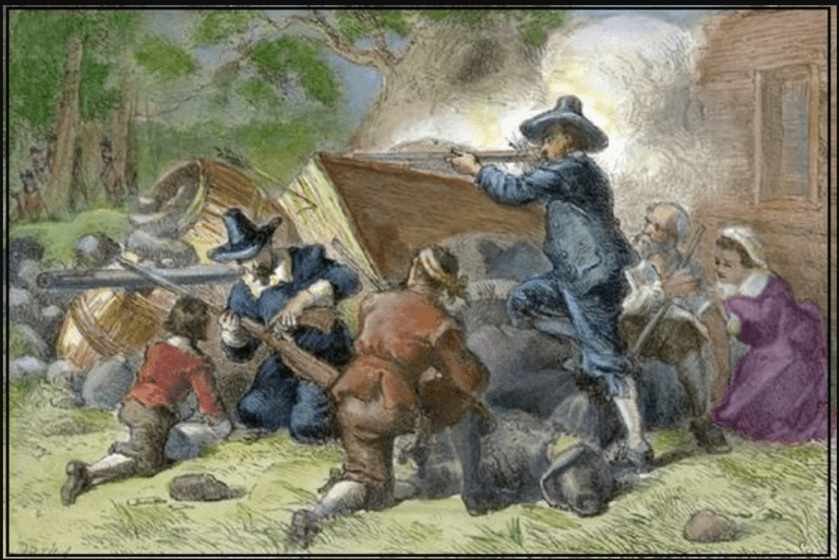 General Nathanial Bacon helped pass legislation, known as “Bacon Laws”, to alleviate some of the oppressiveness being thrown on the colonists. A “Declaration of the People of Virginia” made public the evil rule of Governor Berkeley with his unjust taxation, the appointing of his friends to office, and his failure to protect the people against the Indian attacks.

General Bacon led his men bravely into battle against the Natives several more times that year in 1676. While the militia was out fighting the Indians, protecting their homes, Governor Berkeley yet again plotted against the General. After all, dissidents are a threat to tyrannical rule and must be silenced. The only thing left to do was to remove General Bacon from Twitter and Facebook and make up claims that he was in cahoots with the Russians—oh wait, not that kind of silence (just yet).

Learning of the plot against his life, General Bacon and his men turned their attention away from the Indians and towards the evil tyrant. They marched, albeit exhausted from battle, to Jamestown and determined in their hearts to fight the Governor. The wicked ruler escaped Jamestown, but the people burned the city to the ground and started over. They appointed General Bacon as head of a new legislature committee. Things were looking good. Then, sadly, the General died of illness (it wasn’t COVID) in October of 1676. Utterly heartbroken, the people were without a just leader.

William Berkeley made his way back to Jamestown and overthrew the newly appointed legislature with his own tyrannical dictatorship once again. He hung 23 men who refused to bow to his wishes. Ultimately, the people’s moaning reached the ears of King Charles II who recalled Governor Berkeley back to England. Things did get better for the colonists of Virginia. The Governors who followed Berkeley were mindful not to be too oppressive for fear of another uprising. Even still, the colonists would not see true freedom ever again—not for another one hundred years when the likes of Governor Berkeley were met again with the likes of Nathanial Bacon.

“When the righteous increase, the people rejoice, but when the wicked rule, the people groan.” -Proverbs 29:2

In 1776, the American Spirit was born. No longer would the colonists be subjected to unjust taxes, no representation, and no protection from invaders…until 2020ish when we allowed ourselves to be subjected again to the same Governors—sorry. There I go again.

Nathanial Bacon was a bearded hero. He was a Loxman. He and his brave men were of the first Rebels and the first “Great Rebellion” in America. We must not forget them. We must honor them, even now. Do not comply with unjust mandates and edicts. Rebel.

And let me just clear one thing up: goatees are considered beards. Here’s to you, Nathanial Bacon—you bearded Sharp Savage of the highest degree.

Missed the first installment in this series? Click here to read Bearded Heroes: VOL. I